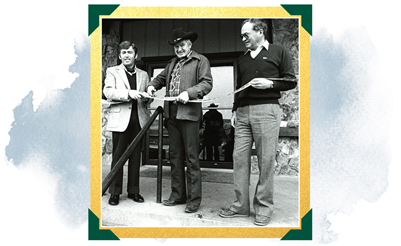 In our 50th year, our golden anniversary, we celebrate Alpine Bank and honor its big-hearted and visionary founder Bob Young.

Alpine Bank is humbled to be recognized as corporate citizen in Colorado; a bank that believes in giving back to the communities that made it successful.

With your help in 2023, we’re raising $2.5 million in Loyalty Debit Card funds to support the nonprofits and organizations that make Colorado the place we’re proud to call home. 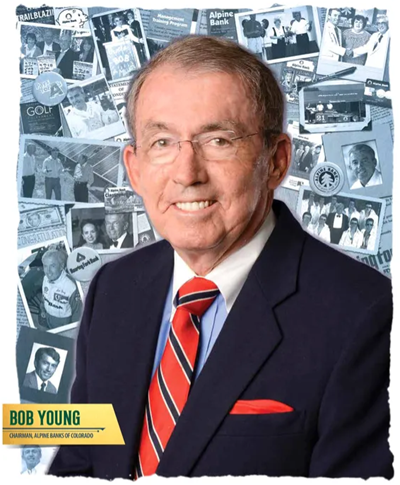 At its 50-year mark, Alpine Bank has grown to become a $6 billion-plus ­financial institution. The ripple effect from the bank’s good work, and the guiding hand of its founder and chairman Bob Young, is far-reaching. Bob’s philosophy has affected not only each Alpine Bank customer but has also influenced the thousands of bank employees, companies and communities that bene­fit from a local bank that cares about them.

“I think it's impossible for a banker to separate out where business interests end and where society's interests begin,” says Bob. "What makes a good banker is somebody who carries the same values. It’s not about making the most money. A good bank is one that can fully support the community in the most positive way.”

As a Kansas seventh grader, Bob formed an auspicious friendship with Bill Vollbracht. Years later, both men would move to Colorado and achieve signifi­cant success working together.

In 1961 Bob was a young father with a bachelor's degree in business administration from Wichita State University. Commencement was on a Saturday, and on Monday, Bob went to work for the FDIC in Kansas City, immersing himself in the regulatory side of banking.

After a couple years, he moved to banking's retail side when he took a job at a new bank in Wichita. When the bank sent him to a class in Boulder, Bob's life in Colorado began. He learned about a small bank in Denver that had just opened and was seeking talent. He applied.

"I took that job," he says. "It was a wonderful opportunity. It's now called FirstBank."

Bob, 26 at the time, became an executive vice president, which eventually landed him at a new little bank in Vail. “Vail was a wonderful place to be at that time and it set me on my path to open my own bank,” Bob says. “That experience made me think if I could do it for them, I could do it by myself.”

Bob didn't open his ­first bank entirely by himself. His old pal Bill Vollbracht was by then the founder of Land Title, which he had started in Denver in 1967.

“I told Bill we should fi­nd a way to start a bank together,” says Bob, who began researching Colorado mountain towns that could support a new bank. He chose Carbondale.

In the summer of ’72, Bob and Bill showed the building contractor a picture of a small Bank of America branch as design inspiration. Six months later, the bank, originally called Roaring Fork Bank, was done for a little less than a hundred grand.

“My vision for the ­first 50 years came a year at a time,” Bob says with a laugh. “I thought maybe the Carbondale bank would one day have $10 million in total assets. At that time, I didn’t necessarily see anything except the next bank down the road."

To give a voice to Colorado's independent banks, in 1973 Bob helped start the Independent Bankers of Colorado.

“It was important at the time to have a group that could fi­ght against the big banks in Colorado. We valued independence and we wanted to stay that way,” Bob says.

The summer of ‘74 began a quick succession of Alpine Banks joining Roaring Fork Valley communities. Bank of Snowmass based in Snowmass Village was fi­rst. Bank of Basalt came next about two years later, followed by Valley Bank and Trust in Glenwood Springs in 1980. West Glenwood and Eagle branches were opened. In ‘89 Alpine Bank got the charter for a bank in Aspen and reached $100 million in assets among their ten banks.

Along the way, staying involved in Colorado's banking industry has remained key. In the '70s, the Colorado Bankers Association board — comprised entirely of representatives of big banks — elected Bob as president. Likewise, in 1988, Gov. Roy Romer (D) appointed Bob to the state banking board, where he served for 20-plus years.

“That was the way we grew, by hiring people, mostly young and just out of school," Bob says. "Or we hired employees into a clerical position and found out their abilities, and they grew with us.“

Employees received a signifi­cant boon in 1983. Bank executive Kris Gardner recalls Bob rushing into her office with a plan for an employee stock ownership plan, or ESOP.

“I felt it would be a good thing for the employees to become owners of the bank,” Bob says.

Kris remembers Bob enthusiastically declaring: I think we’re gonna do this! “I didn’t quite understand it then,” Kris says. “But I sure do now.”

Essentially, Alpine Bank's ESOP means that its employees, with 18% ownership, are one of the largest owners of the bank. It has also helped to make some employees — who were with the bank from the start — millionaires at retirement. Once an employee has been with the bank for six years, they’re considered fully vested.

And Bob's concern for employees, even outside of his own bank, was evident in 1995-96, when the 21-day government shutdown meant federal employees weren’t getting paid. Alpine Bank gave interest-free paycheck loans to federal employees, whether they were customers of the bank or not.

“The bank has received so many awards in the last 25 years, it’s hard for me to remember them all, and each one is better than the others,” Bob says. The awards include recognition for being a top employer, philanthropic leadership, commitment to sustainability, and being a top ­financial services provider in numerous categories.

Although Bob has received signi­ficant acknowledgments himself, a few are particularly close to his heart. One is the Athena Award, presented by the Glenwood Springs Chamber Resort Association, which Bob received in 2006. The award acknowledges professional excellence, those who improve the quality of life for community members and those who assist others, particularly women, in realizing their full leadership potential. Only 5% of Athena recipients are men. “It felt very special to me to receive an award especially meant for women,” says Bob.

To this point, Bob’s daughter Margo and granddaughter Lindsay are in leadership positions at the bank. (A family-oriented person, Bob has four children and seven grandchildren.) And he had no hesitation in promoting Kris Gardner to the role of bank president to run the West Glenwood branch. At that time, Kris was one of just a handful of female bank executives in the industry.

Bob was also inducted into the 2011 Colorado Hall of Fame, following his lifelong friend and business partner Bill Vollbracht, who was inducted in 2008. “I value it because very few people are awarded this recognition,” Bob says.

ON VISION AND THE FUTURE

As always, Bob credits Alpine Bank's employees as those responsible for its current success. And looking ahead?

“For the next 50 years, I see we’ve got strong management people at every level,” Bob says, he’s gratified by the growth into Denver, Boulder, Fort Collins and Colorado Springs. “We’re independent, and I want to stay independent, I don’t want to sell out to somebody else. That’s what sets us apart from most of our competition. As we grow, we give our employees the chance to grow with us; without them it wouldn’t work. We’d be like Chase, Bank of America and Wells Fargo.”

Bob believes that Alpine Bank can’t do what it does if its communities aren’t successful. “They’re most important," he says. "We’ve chosen to give back to our communities; they’ve made us what we are.”

He reminisces about the day the fi­rst bank opened and he cut a ribbon that was full of silver dollars — 50 to be exact, and donated it to a Carbondale nonpro­fit. Bob adds that now, Alpine Bank has numerous opportunities like that at every level. “Our donations are much larger, maybe $50,000 or $500,000,” he says. “The number isn’t necessarily important; what’s most important is that it’s a number that we can afford to help the nonpro­fits and the communities we serve.”